The Adversarial Robustness of VAEs

While previous work has developed algorithmic approaches to attacking and defending Variational Autoencoders (VAEs), there remains a lack of formalization for what it even means for a VAE to be robust to adversarial attack.

In adversarial settings an agent is trying to alter the behavior of a model towards a specific goal. This could involve, in the case of classification, adding a very small perturbation to an input so as to alter the model’s predicted class. For many deep learning models small changes to data imperceptible to the human eye can drastically change a model’s output.

Here we briefly review the inherent adversarial robustness of VAEs.

Before introducing VAEs, we quickly describe variational Bayesian methods, a set of inference methods which underpin the training of VAEs.

The parameters of the likelihood \(p_\theta(\mathbf{x}\mid\mathbf{z})\) are encoded by neural networks which take in samples of \(\mathbf{z}\). A common choice of prior for the space \(\mathcal{Z}\) is the unit normal Gaussian, \(p(\mathbf{z})=\mathcal{N}(0,\mathcal{I})\). As exact inference for these models is intractable, one performs amortised stochastic variational inference by introducing another inference network for the latent variables, \(q_\phi(\mathbf{z}\mid\mathbf{x})\), which often encodes the parameters of another Gaussian, \(\mathcal{N}(\mu_\phi(\mathbf{x}),\Sigma_\phi(\mathbf{x}))​\) [2].

In the case of VAEs, given the factorisation of \(p​\) specified above and given the amortisation of inference we can write,

where \(\mu_\phi(\mathbf{x})\) and \(\sigma_\phi(\mathbf{x})\) are the mean and standard deviation parameterised by the encoder. We coin this layer the ‘stochastic’ layer of the VAE. We approximate the likelihood using samples from this stochastic layer. Draws from \(p_\theta(\mathbf{x}\mid\mathbf{z})\) are termed ‘reconstructions’ of the original data \(\mathbf{x}\) in the VAE literature. We can also use these samples to approximate the \(\mathrm{KL}​\) divergence, but it has a tractable form in the case of Gaussian distributions.

The Adversarial Robustness of VAEs

Generally, VAEs and VAE inspired models, such as Variational Information Bottleneck have been found to be more resilient to input perturbations (and also more targeted attacks) than their deterministic counterparts. Nevertheless these models are still susceptible to attacks from adversaries.

In the image below we give an example of adversarial attacks on the CelebA dataset. We start with the image of Hugh Jackman in the top left and have an adversary that tries to produce reconstructions that look like Anna Wintour as per the top right. This is done by applying a distortion (third column) to the original image to produce an adversarial input (second column). We can see that the adversarial reconstruction for the VAE looks substantially like Wintour, indicating a successful attack. This figure is taken from my paper. 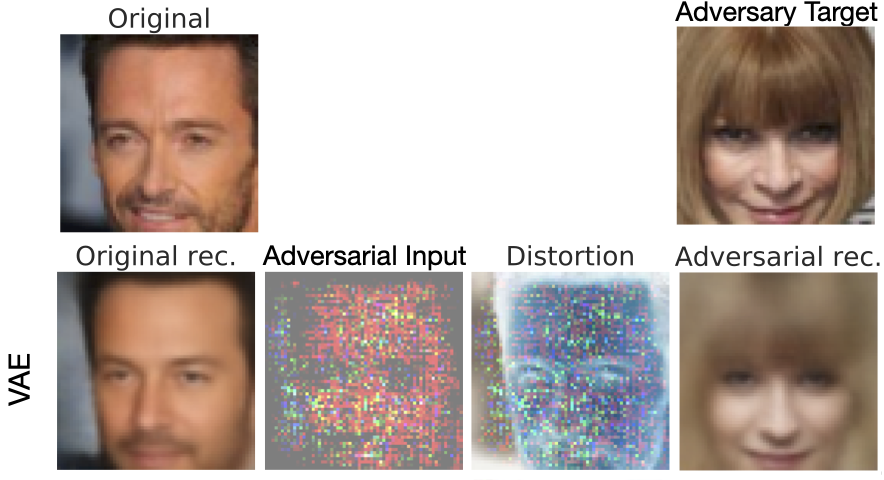 A probabilistic metric of robustness

Deep learning models can be brittle. Some of the most sophisticated deep learning classifiers can be broken by simply adding small pertubations to their inputs. Here, perturbations that would not fool a human break neural network predictions. A model’s weakness to such perturbations is called its sensitivity. For classifiers, we can straightforwardly define an associated sensitivity margin, it is the radius of the largest metric ball centered on an input \(\mathbf{x}\) for which a classifier’s original prediction holds for all possible perturbations within that ball.

Defining such a margin for VAEs is conceptually more difficult as, in general, the reconstructions are continuous rather than discrete. To put it another way, there is no step-change in VAE reconstructions that is akin to a change of a predicted class in classifiers; any perturbation in the input space will result in a change in the VAE output. To complicate matters further, a VAE’s latent space is stochastic, the same input can result in different reconstructions.

My recent paper makes inroads towards defining a sensitivity margin, which we call \(r​\)-robustness, for probabilistic models.

We will assume from now on that the norm is taken to be the 2-norm \(\|\cdot\|_2​\), such that \(r​\)-robustness determines a bound for which changes in the output \(f(\mathbf{x})​\) induced by the perturbation \(\mathbf{\delta}​\) are more likely to fall within the hyper-sphere of radius \(r​\), than not. As \(r​\) decreases, the criterion for model robustness becomes stricter.

Because this criterion is applicable to probabilistic models with continuous output spaces, it is directly relevant for ascertaining robustness in VAEs. By considering the smallest \(r\) for which the criterion holds, we can think of it as a metric that provides a probabilistic measure of the extent to which outputs are altered given a corrupted input, the smaller the value of \(r\) for which we can confirm \(r\)-robustness, the more robust the model.

A Robustness Margin for VAEs

We want to define a margin in a VAE’s input space for which it is robust to perturbations of a given input. Perturbations that fall within this margin should not break our criterion for robustness.

However, to consider the robustness of VAEs, we must not only take into account the perturbation \(\mathbf{\delta}_x\), but also the stochasticity of encoder. We can think of the decoder as taking in noisy inputs because of this stochasticity.Naturally, this noise can itself potentially cause issues in the robustness of VAE, if the level of noise is too high, we will not achieve reliable reconstructions even without perturbing the original inputs.As such, before even considering perturbations, we first need to adapt our \(r​\)-robustness framework to deal with this stochasticity.

We illustrate \(r\)-robustness in a VAE visually in the image below. White dots represent possible reconstructions, with the diversity originating from the encoder stochasticity.For \(r\)-robustness to hold, the probability of our reconstruction falling within the red area—a hypersphere of radius \(r\) centered on \(g_{\theta}(\mathbf{\mu}_\phi(\mathbf{x}))\) —needs to be greater than or equal to the probability of falling outside. We denote \(g_{\theta}(\mathbf{z})\) as the deterministic mapping induced by the VAE’s decoder network and \(\mathbf{\mu}_\phi(\mathbf{x})\) as the mean embedding of the encoder, we can define \(g_{\theta}(\mathbf{\mu}_\phi(\mathbf{x}))\) to be the ‘maximum likelihood’ reconstruction, noting that this is a deterministic function. 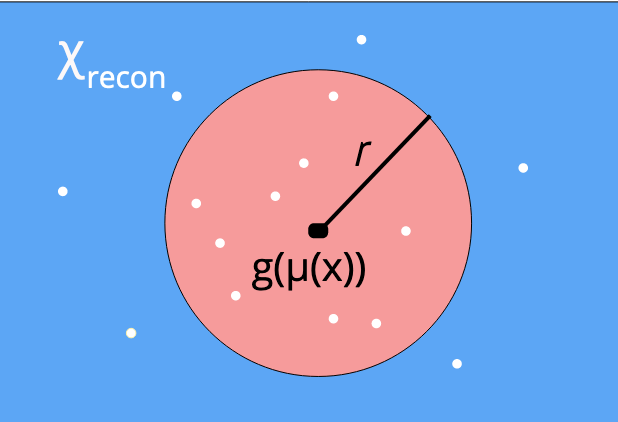 Using this definition we can begin to charaterise the margin of robustness of a VAE.

A margin of robustness for VAEs

Given that we have established conditions for \(r\)-robustness in that take into account latent space sampling, we can now return to our original objective, which was to determine a margin in the data-space \(\mathcal{X}\) for which a VAE is robust to perturbations on its input. Recall that this implicitly means that we want to define a bound for robustness given two sources of perturbations, the stochasticity of the encoder, and a hypothetical input perturbation \(\mathbf{\delta}_x\). 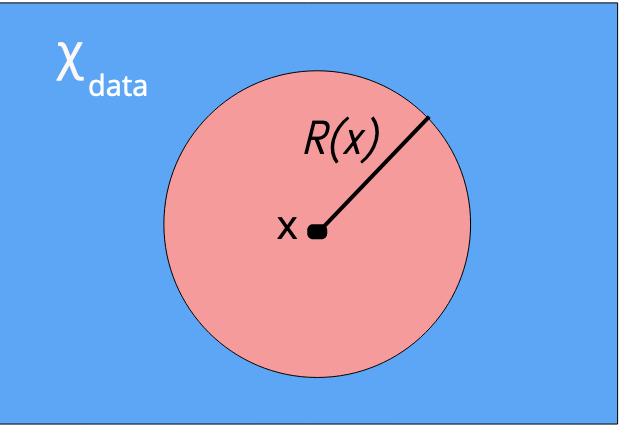 This theorising is all well and good, but can it be used to predict the robustness of models ? Are models with larger margins \(R^r_{\mathcal{X}}(\mathbf{x})​\) more robust to adversarial attack ?

In the image below for instance each subfigure shows from left to right: the original input, a perturbed input made by an adversarial attack, and the reconstruction of the perturbed input. We show results for VAEs that are robust (\(R^r_{\mathcal{X}}(\mathbf{x})\ge\| \delta_x\rVert_2\)) and non-robust (\(R^r_{\mathcal{X}}(\mathbf{x})<\| \delta_x\rVert_2\)) for a given point \(\mathbf{x}\) and adversarially selected perturbation \(\delta_x\). It is clear that the robust VAE reconstructions are visually closer to the original input.

In the images below it is clear that that as \(R^r_{\mathcal{X}}(\mathbf{x})\) increases the degradation in likelihood engendered by these attacks lessens, indicating less damaging attacks. Larger ‘margins’ of robustness correspond to more robust models.

In the figure below we plot numerically estimated margins of robustness against our bound, ignoring higher order terms encapsulated in \(\mathcal{O} (\varepsilon)\). For all three datasets we show our derived bound is a valid lower bound for the true margin of robustness, and is a relatively tight bound.

Note that this bound includes two terms that might contribute to the robustness. The encoder variance plays a prominent role and is a parameter that is easy to control. The encoder Jacobian is also present, but we found that controlling such values directly can be difficult. Nevertheless, we find in my recent paper that \(\beta\)-VAEs [3], which upweight the KL term of the VAE ELBO, induce a regularisation that increases both the encoder variance and penalises large encoder Jacobians. We find that these models are more robust than vanilla VAEs, suggesting that regularising a VAE’s latent space, by acting on the KL, is a viable strategy for inducing robust models.